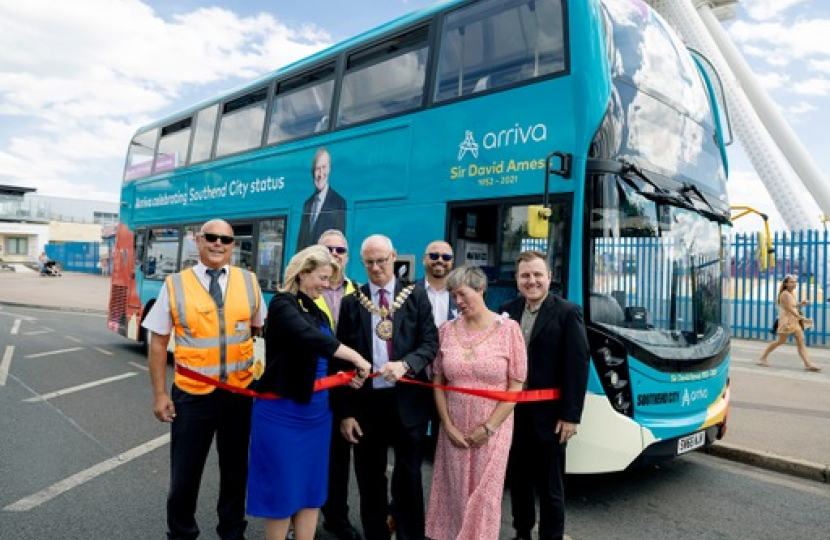 The Arriva South Team have transformed a double-decker bus into a moving celebration of Southend and a lasting recognition of Sir David Amess - honouring the amazing work Sir David Amess did in his constituency alongside his tireless work to help Southend gain City Status, before his tragic death in 2021. His parliamentary portrait is proudly shown, in full display, on the side of the bus. The bus’s unique design also includes a silhouetted Southend city skyline.

The Southend City Bus was officially launched into service on Thursday 14th July with Member of parliament for Southend West, Anna Firth, The Mayor, Cllr Kevin Robinson and the Mayoress, Mrs Debbie Robinson all in attendance to cut the ribbon and join in on this emotional but beautiful day.

“It is a huge privilege to be asked to the ceremony to name the new bus in memory of Sir David Amess.

For 25 years, Sir David was a vocal champion for Southend, and his calls for Southend to become a city were legendary. Everybody misses his decency, his kindness, his smile and his wicked sense of humour. I also want to pay tribute to Sir David’s family, and especially to his widow, Lady Julia, whom I am representing.

Southend was finally granted city status in memory of Sir David. It is a wonderful memorial to a man who was such a passionate and devoted advocate for our area. I know that this new bus will be a great way for everyone in Southend to remember Sir David.”

“We are incredibly proud to be able to celebrate the city status in this way, as well as honour the life of Sir David who campaigned for all of his political career to make this happen”