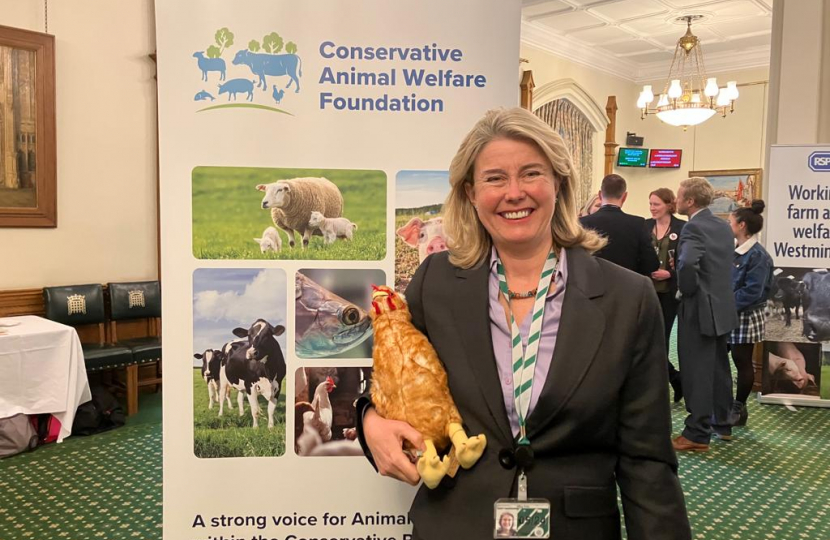 I have been contacted by many constituents about the very important issue of animal welfare. As an animal lover myself, this is an issue that I take extremely seriously, and I am proud to be continuing the work that Sir David Amess did on this.

One of the first campaigns that I initiated following my election was to call for dog-on-dog attacks to be made an offence after one of my constituent’s dogs, Milly, was, mauled to death in a vicious attack by another dog. Extraordinarily, the owner of a dog who kills another dog is not liable for prosecution at the moment, and I am determined to end this loophole. This campaign has been featured in the Daily Express, and you can read more about it here - Calls for dog-on-dog attacks to be made offence after beloved pet mauled to death | Politics | News | Express.co.uk

The Government has been doing a lot of work to improve animal welfare, and has set out an ambitious set of reforms, which can be found in the Action Plan for Animal Welfare. https://www.gov.uk/government/publications/action-plan-for-animal-welfare

Since 2010, the Government has achieved many improvements to animal welfare including banning the use of conventional battery cages for laying hens, as well as making CCTV mandatory in slaughterhouses across England. Other measures introduced include the mandatory microchipping of dogs in 2015 and the modernisation of the licensing system for dog breeding and pet sales.

I am delighted that the Government’s Animal Welfare (Kept Animals) Bill will bring in some of the world’s strongest protections for pets, livestock and kept wild animals. This includes introducing a ban on keeping primates as pets, banning the export of live animals for slaughter and fattening, and also addressing the unethical trade of puppy smuggling by reducing the number of pets that can travel under pet travel rules. The Bill passed Committee stage in the House of Commons and I look forward to supporting this Bill as it continues to progress through Parliament.

I am also encouraged that the Animal Welfare (Sentience) Bill will formally recognise animals as sentient beings in domestic law and ensure that animal sentience is taken into account when developing policy across Government through the creation of an Animal Sentience Committee, which will be made up of animal experts from within the field.

I would like to reassure constituents that I take the issue of illegal puppy imports very seriously. I welcome that the Animal Welfare (Kept Animals) Bill will tackle the unethical trade of puppy smuggling by reducing the number of pets, including dogs, cats and ferrets, that can travel under pet travel rules. The Bill also contains an enabling power to allow the Environment Secretary to make regulations about the importation of cats, dogs and ferrets for the purpose of promoting their welfare. Further restrictions could include an increase in the minimum age of imported puppies, as well as the prohibition of the import of pregnant dogs and dogs with mutilations such as cropped ears and tails. The Animal Welfare (Kept Animals) Bill has now passed Committee Stage in the House of Commons, and I will be keeping a close eye on this issue as it progresses.

I know many people are concerned about the use of snares. These can cause immense suffering to the animals that are caught in them. The Animal Welfare Act 2006 prohibits causing unnecessary suffering to animals, which includes animals caught in traps. Trapped animals should be released from a snare trap as soon as reasonably practicable after discovery.

As part of the drive to maintain our high animal welfare standards, I welcome that the Action Plan for Animal Welfare sets out the Government’s intention to launch a call for evidence on the use of snares, and ministers will consider whether changes are needed. If, however, you believe an individual is inflicting unnecessary suffering on animals, the matter should be reported to the police.