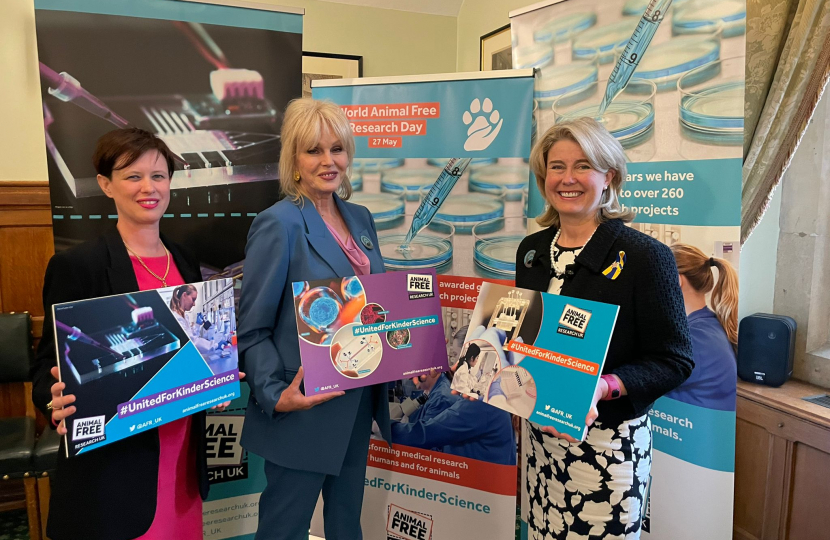 Anna Firth, Member of Parliament for Southend West has called for an end to the use of animals in medical research in a speech in Parliament.

By law, all new drugs must be tested on a mouse or rat as well as a larger non-rodent mammal, usually a dog, pig or monkey, before they are given to people – but animals may not be used if there is an alternative.

Around 2.88 million experiments were carried out in 2020 in Britain on living animals, including breeding genetically modified creatures, latest Home Office statistics show. Cats, dogs, horses and primates were used in one per cent of those. Animal Free Research UK have come up with a new 8 point plan to end the use of animals in medical research.

Anna joined other Members of Parliament, including Luke Pollard, in urging the Government to appoint a minister to lead a transition to medical experiments without animals. In her speech at the event, Anna called for a government backed action plan that sets out positive solutions to tackle this issue and provide a kinder, more appropriate approach to science, and one that will benefit both humans and animals.

The event was joined by former Bond-Girl and Ab-Fab star Dame Joanna Lumley, who is a long-term campaigner for animal rights.

“Using animals in medical research is not only unethical, costly and unjustifiable, but it is being increasingly accepted among the scientific community that this practice fails patients.

“New medicines which appear safe and effective in tests on animals often fail to be approved for market because they pose significant safety and efficacy concerns during human trials.”