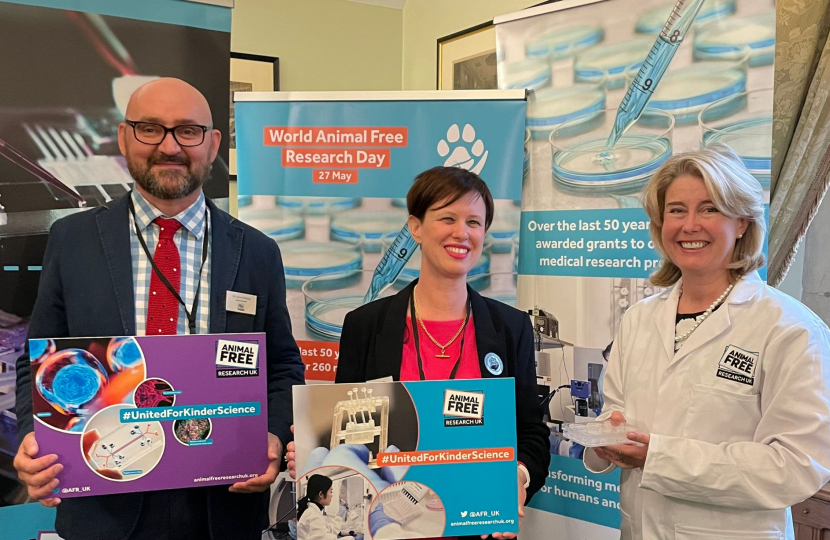 Thank you very much to Animal Free Research UK for all that you are doing to advance ethical research.

I am delighted to be speaking today and thank CEO, Carla Owen, and Science Director, Dr Jarrod Bailey

I have always been an animal lover.  When I was at school, it was always a point of some amusement and teasing, that we had far more animals in my house then we had rooms!!  At one point we had 14 different animals from slow worms and stick insects, through a variety of different rodents to guinea-pigs, rabbits and poultry, 3 cats, one dog and a pet rescue turkey called Theresa and a parrot called Percy.

Now I just have a very mundane 2 cats, one dog and one husband! (all pretty spoilt in my opinion, husband probably disagree)

I must also mention my predecessor, Sir David Amess, and the huge impact that he had in this field – from his successful private members bill eliminating cruel tethering to his own private menagerie on the Parliamentary estate. At its height he had 6 aquariums, 7 birds, 2 turtles and a crab – nearly a zoo! He really did have the security on his side!

I am very proud to continue his legacy and commitment – and indeed to bring my own passion and voice to support human relevant science.

There is also a growing appetite amongst Members of Parliament to support animal welfare issues such as banning hunting, banning the sale of foie gras, glue traps, animal transportation, and pet theft. Personally, I am working hard to make dog-on-dog attacks a criminal offence.

But the British people want to see us go much further and much faster on this issue.

Two-thirds of British people want to see a binding plan in place to phase out animal testing.

In a poll carried out for Cruelty Free International by YouGov in September, two-thirds (66%) agree that a target date should be set for the end of all animal experiments.

Sadly, the number of animals suffering in experiments   in the UK remains the highest in Europe, with Home Office statistics for 2020 revealing that 2.9 million animal experiments took place, and the UK is one of the top users of dogs and monkeys in Europe.

Not only do animal experiments cause inexcusable suffering to animals in laboratories, they represent Victorian science. Despite extensive testing on millions of animals every single year there has been a notable lack of progress in addressing many key areas of Alzheimer’s and Parkinson’s diseases and many types of cancer. The reason for this is that many animal-based approaches have extremely poor relevance to humans. This is due to numerous genetic differences between species. For example more than 92 per cent of drugs that show promise in animal tests and that proceed into human trials, fail to get to clinic, mostly for reasons of poor efficacy and safety that were not predicted by animal testing.

By investing in human relevant science, we can produce superior results for humans and save animals needless suffering.  It is way past time to put our money where our mouths are and demonstrate this commitment by funding more of these technologies and removing barriers so that we can cure diseases faster and without the suffering of so many animals for little human gain.  This is quite literally a win:win:win situation.

It's a win for scientists

It’s a win for patients &

It’s a win for animals

I have read the ‘Eight Steps’ Policy document and I fully support the calls made by Animal Free Research UK. We need a government backed action plan that sets out positive solutions to tackle this issue and provide a kinder, more appropriate approach to science, and one that will benefit both humans and animals.

This is the way to provide real hope while also proving that our scientists are true pioneers in animal-free research.

To echo Luke’s words, I really do believe we have a chance to change the outcome for humans and animals if we make the brave decision to not turn our eyes and ears away from the situation and I look forward to working with my parliamentary colleagues from across the House, to unite for a kinder and more effective approach to science in the UK. There is a better way forward.