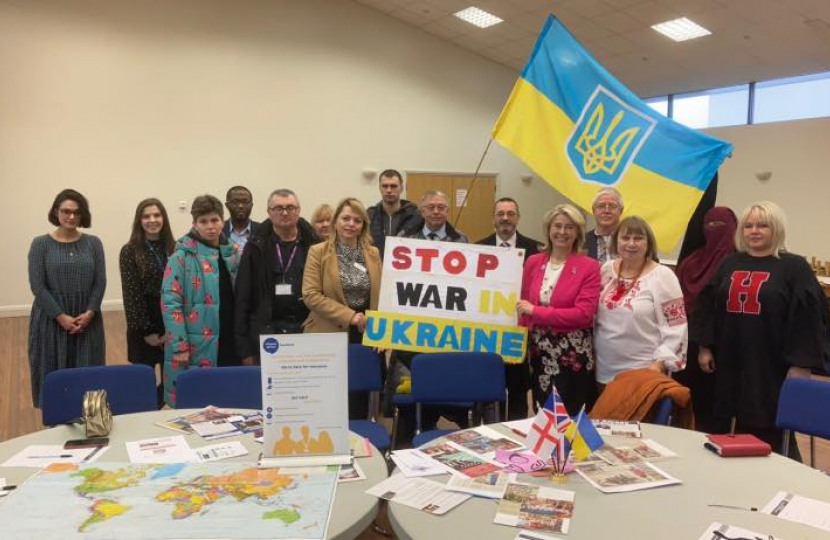 I have been humbled by the huge generosity shown by local residents for the Ukrainian people affected by the unjustifiable invasion of Ukraine. Just as after the murder of Sir David last year, Southend has demonstrated what an exceptional community it is and how lucky we are to be a part of it. I have been hugely impressed by the tireless efforts of local charities, the Leigh Community Centre and local restaurants such as Domowe Obiady U Babci, in collecting donations and raising awareness of we can all do to help.

As your local MP, I take the local issues arising as a result of Putin’s aggression extremely seriously. I held an emergency surgery to directly hear from Ukrainian families in Southend, and asked the Home Secretary in the House of Commons whether the visa system is fit for purpose. I have been prioritising assisting constituents with family members in Ukraine.

Nationally, it’s been great to see the launch of the new 'Homes for Ukraine' scheme which will allow individuals, charities, community groups and businesses in the UK to bring Ukrainians to safety - including those with no family ties with the UK which is crucial. Individual sponsors are being asked to provide homes or a spare room rent-free for as long as they are able, with a minimum stay of six months. In return, they will receive £350 per month. Ukrainians arriving in the UK under this scheme will be granted three years' leave to remain, with entitlement to work, and access benefits and public services. If you want to record interest in the scheme you can head to https://www.gov.uk/register-interest-homes-ukraine.

I totally agree that it’s troubling to hear reports of desperate Ukrainians who have left their homes struggling to access the generous support provided by the Government. It’s vital that they can do so as quickly as possible and I am encouraged that the Government is taking measures to tackle this. I myself met with Lord Harrington, the Minister for Refugees, to convey the concerns of my constituents and receive assurances that the Government was taking the right steps.

Many people have also concerns about the Nationality and Borders Bill. Please rest assured I have taken careful consideration about all aspects of this bill, and recently met with the Revd Steve Tinning from Southend to discuss his and other constituents’ reservations. I am pleased that the proposals in the New Plan for Immigration and the Nationality and Borders Bill fully comply with the UK's global obligations including commitments to the European Convention on Human Rights and the UN Refugee Convention.