Boris Johnson: My Guarantee to Get Brexit Done and Unleash Britain’s Potential 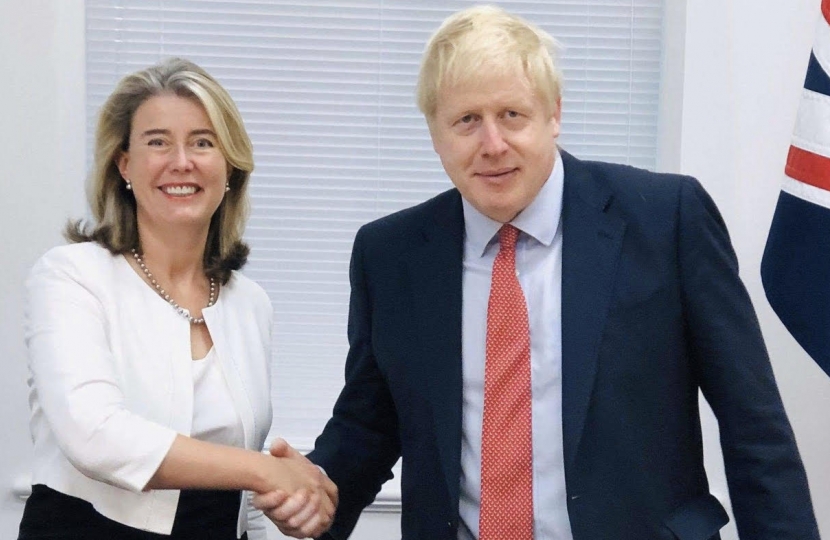 Prime Minister Boris Johnson has today launched the Conservative manifesto in Telford, setting out how he will get Brexit done and unleash Britain’s potential.

He unveiled new manifesto commitments, including 50,000 more nurses in the NHS, a long-term budget for the NHS guaranteed in law and more than £4 billion investment in local transport such as trains, trams and buses.

On the inside cover of the manifesto, the Prime Minister sets out his personal guarantee to the British people. If there is a Conservative majority government, he guarantees:

With 635 candidates pledging to back the deal, only a majority Conservative government can get Brexit done so we can move on and focus on people’s priorities.

The Prime Minister has said that bringing back the Brexit bill is an ‘early Christmas present to the nation’ and that the Conservatives are ‘offering hope and optimism where the Labour party only offer deadlock and division.’

2020 can be a year of hope and opportunity, and the Conservative manifesto details the way we will harness our strong market economy to protect and improve the public services we rely on – our NHS, police, and schools.

“Good afternoon everybody. Wonderful to see everyone here today. Thanks for coming along this afternoon

because in just the last few days we have heard from every other party haven’t we?

As they have launched their manifestos

and we have heard

how they would keep us stuck in the same rut

how they would refuse, every other party, to get Brexit done

as for Labour – as for Labour, they will plainly give in to Nicola Sturgeon and waste the whole of next year in two more referendums, one on Scotland and one on the EU

He used to be indecisive – now he’s not so sure

Do we want 2020 to be a year of defeatism and despair?

No we don’t. We want to move forward because this country has an incredible future

Here is the route map to take us forward

because unlike any other party standing at this election

We’re going to get Brexit done

with a deal that is pre-cooked, ready to go, oven-ready as I keep saying, approved not just by our friends in the EU but by every single one of the 635 Conservative candidates standing at this election

Get Brexit done - and we restore confidence and certainty to business and families.

Get Brexit done - and we will see a pent-up tidal wave of investment into this country.

Get Brexit done - and we can focus our hearts and minds on the priorities of the British people,

and today in this manifesto we pledge 50,000 more nurses and their bursaries and 50 million more GP surgery appointments

and today we make this guarantee to the British people

that we will tackle crime with 20,000 more police officers and tougher sentencing

that we will invest millions more every week in science, in schools, in apprenticeships and in infrastructure and control our debt at the same time

with infrastructure, education and technology

because here more than 200 years ago

the phlegethontian fires of Coalbrookdale

and this whole region was a giant crucible

and turn water into steam and power

and it is an incredible thing that here once again

in the West Midlands

not by burning coal

not by emitting CO2

but thanks to British ingenuity we can make electrons swoosh so efficiently from anode to the cathode, or possibly vice verse, but that’s the right idea.

that after decades of trying we can make electric cars

and we can make electric buses

it is time to unleash the potential of the whole country

and to forge a new Britain

but I know and every survey confirms

that genius, talent, ability, flair – all are distributed evenly throughout the UK

Opportunity is not distributed evenly

and I passionately believe that with education, infrastructure, technology

we can tackle that unfairness

we can unleash that potential and we can make those investments

and that is why we are cutting taxes for small businesses

we don’t sneer at them

we cheer for them

and that is the choice at this election

You can come with us, and have a government that backs our armed forces as a power for good around the world

We support our police, putting more and more on the street, support them in fighting knife crime –

they say stop and search is inappropriate and oppressive

We want higher wages, and are raising the living wage by the biggest ever increase

Corbyn seemed actually to take the side of Moscow

Above all, and here’s the most important difference we face in the next few days

we will get Brexit done, we will end the acrimony and the chaos

What on earth are they supposed to think in Brussels?

Bonjour monsieur Corbyn comment allez vous? tell us about this that deal you want…

Then who does believe in it??

it would be farcical, it would be comical, if the consequences of that approach were not so disastrous for this country and for our prospects next year

Let’s give that madness a miss

I want you to look forward to a Britain where the streets are safer, where the air is cleaner, where we have built 40 new hospitals as a direct result of the decisions taken in the last 3 months

from AI to the gigafactory for batteries that we will inaugurate

to the new space ports in Cornwall and Scotland that will send British made satellites in to the heavens and drive one of our most exciting industries.

a Britain where we are uniting and levelling up

where great new infrastructure is helping to rebalance the economy, delivering Northern Powerhouse rail AND a metro style system for the whole of the west midlands

a Britain where left behind towns have recovered their vibrancy and commercial life and optimism, with shops and businesses made possible by better transport and fantastic broadband

and then in turn where better infrastructure is allowing us to build thousands of superb new homes, hundreds of thousands, on brownfield sites – giving young people the prospect of home ownership that they currently don’t have

that every survey shows is what people in this country wants

and in ten years time I confidently prophesy that we people will be passionately proud of their Scottish identity, and their Welsh and Northern Irish, and yes their English identity. And that will be a great thing.

But we will also all be proud strong and whole United Kingdom, more united than ever, flying that red white and blue Union flag that represents the best of our values, from democracy and the rule of law

and a Britain that is able to lead the world = as we do – in tackling climate change and to reduce our CO2 to net zero by 2050 not because we hate capitalism, and want to destroy it, and want pointlessly to make an enemy of enterprise

And that is the vision we are offering – to make this country the greatest place to live, to breathe, to be, to raise kids, to start a business

the greatest place on earth

and I propose that we get on with it now

I don’t want to waste 2020 in two more referendums

I want it to be an exciting and productive year, a year of prosperity and growth

Do you want to wake up on Friday 13th December and find a nightmare on Downing Street, a Corbyn-Sturgeon coalition of chaos?

It was a privilege to join James Duddridge MP to judge the Southend Citizens Advice festive bake-off competition on Monday.

The team do a fantastic job providing valuable impartial and independent advice to local people - and it was great to see them all in such high spirits.