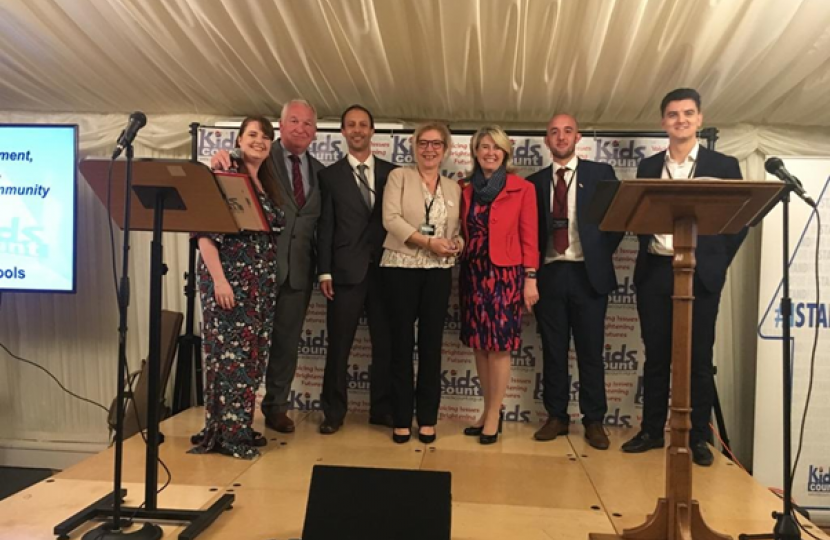 Today, Anna presented the “Inspire the House” Most Inspirational Community group award to N-ACT Theatre in Schools at a ceremony in the House of Commons. Anna presented the award to Artistic Director & Founder Dr Sharon Williams and other members of the group in front of an audience of young people, community organisations, business, Kids Count representatives, peers and MPs.

N-ACT is a not-for-profit theatre touring company based in Southend which specialises in delivering interactive performances to educational establishments, colleges, and the wider community.  Dr Williams’ vision is to use the power of interactive theatre to not only entertain but to ignite curiosity, provoke thought and educate young people, so they can make informed decisions on issues such as mental health, internet safety and gangs.

The award is part of the Kids Count Inspiration Awards which have been held in the House of Commons for over a decade to recognise, encourage and reward the amazing things young people and the community are doing around the UK.

Speaking after the event, Anna said: “I could not be prouder that one of my constituents has won this award. Dr Sharon Williams’ work in setting up N-ACT is nothing short of inspirational and you could not have a more hard-working and deserving recipient. They create hard-hitting but brilliantly effective theatre to communicate challenging but essential messages which make our community safer and healthier through the education of young people.

“Southend is a nation-leading community in terms of local initiatives and the N-ACT group blazes a trail for others to follow as they reach out to young people about the most difficult issues. As your local MP, I will continue to promote the exceptional community groups we are lucky to have in Southend. It’s onwards and upwards for N-ACT and for our community!”

In addition, Dr Williams commented: “This recognition of our work is particularly meaningful to us as it originally came from a nomination from Sir David Amess. He came to see all of our shows and was a strong supporter of our work. We were so proud to receive the award from MP Anna Firth.

“Our plays on knife crime and county line gangs, and mental health have been seen by over 18,000 young people since we launched our theatre company in 2017. The work we do is important in how it empowers young people to make the right choices. We were overwhelmed by the quality of all the other winners at the event at The House of Commons and feel proud to have been counted among them.”