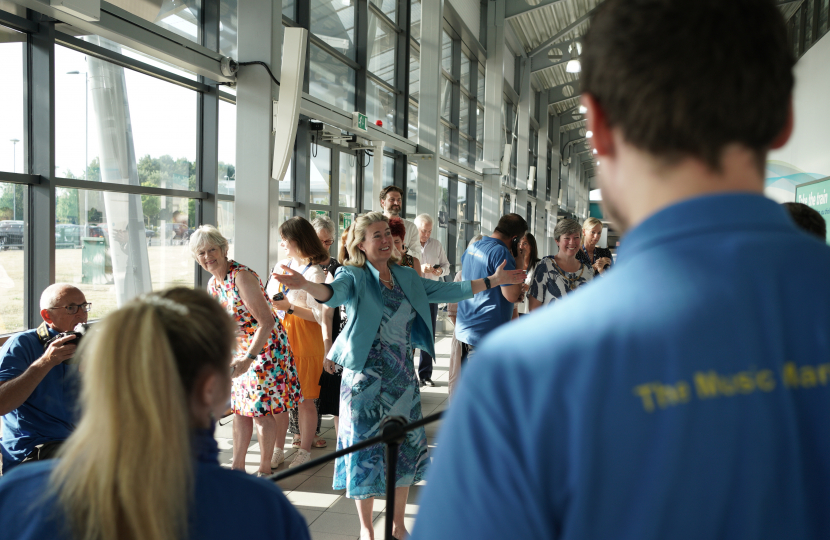 On the 19th July 2022, Anna Firth, the Member of Parliament for Southend West, unveiled a tapestry at London Southend Airport that was dearly loved by the late Sir David Amess MP.

The artwork, titled Connecting Threads and designed by artist Gwen Simpson, pays tribute to the 1,130 garment workers who lost their lives when five factory units, part of the eight-storey Rana Plaza building in Bangladesh collapsed in April 2013.

Sir David Amess MP sought to find a suitable place to exhibit the tapestry, which will now be hung in the check-in hall at London Southend Airport.

Anna Firth was joined at London Southend Airport by the Mayor of Southend, Cllr Kevin Robinson and airport CEO Glyn Jones. The unveiling was accompanied by The Music Man Project, who also had close ties with Sir David Amess. The Music Man Project is an international music education service for children and adults with learning disabilities.

The Music Man Project will also be headlining the Sunday performance at the upcoming Southend City Festival, which will run 2-4 September at the hangar at London Southend Airport.

“It was an honour to unveil this incredible tapestry that tells the story of a terrible human tragedy, and serves as an example of the true cost of fast fashion. This tapestry was incredibly important to Sir David Amess, and I am glad that London Southend Airport has given this artwork a home. The airport is also home to the upcoming Southend City Festival. The festival will allow people from across Southend and the wider area to come together to celebrate Southend’s City status and enjoy a wide range of music performed by both international artists and local performers such as The Music Man Project, who do so much good in this area.”

“Connecting the community around us is a major focus for London Southend Airport and so we are delighted to provide a home for the Connecting Threads tapestry. We were delighted to welcome Anna Firth MP and Cllr Kevin Robinson for the tapestry unveiling, and we really enjoyed the performance by The Music Man Project. I am also really looking forward to their performance when we host the upcoming Southend City Festival on 2-4 September. That festival will bring people together from across the area to celebrate Southend’s city status and experience music from internationally renowned artists. We are working with some incredible, experienced partners to put on that event and are delighted to be playing our part in putting our vibrant City on the festival map.”

“It was such an honour for The Music Man Project to perform at the unveiling of the wonderful tapestry in London Southend Airport. It was another important occassion for our City and our musicians always enjoy meeting the Mayor and Mayoress and seeing our lovely patron, Anna Firth MP.

Opportunities like this to perform in new venues and inspire more people are vital for my community.

"This project has given the opportunity to raise awareness of fast fashion industry and textile workers. Skills are being lost and not past on, especially the loss of traditional textile skills"