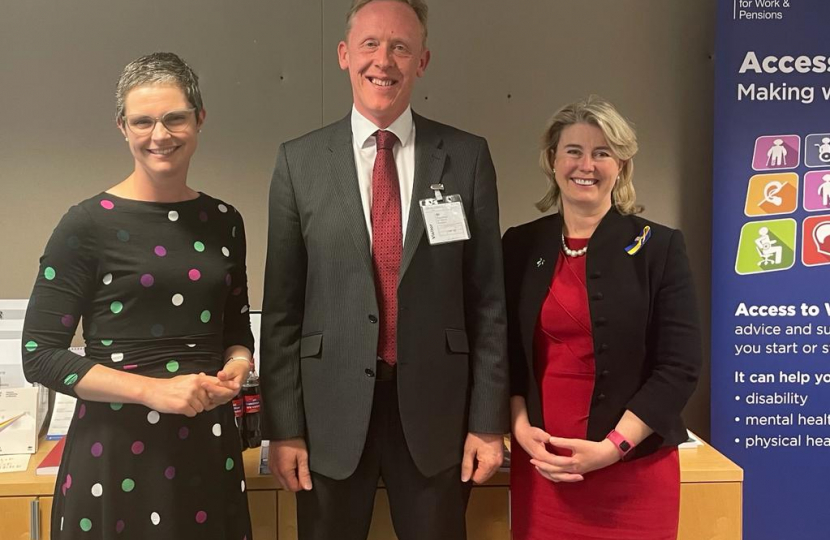 Today Anna Firth, Member of Parliament for Southend West, attended a meeting at the Department for Work and Pensions with David Stanley of the Music Man Project and Chloe Smith MP, Minister of State for Disabled People, Work and Health. The meeting was also attended by the Rt. Hon Penny Mordaunt MP.

Both Anna and Penny are patrons of the Music Man Project and the meeting with the Minister was arranged to give Mr Stanley the opportunity to promote the Southend-started Music Man Project and discuss future opportunities that might raise the profile of the project to the benefit of the entire UK in breaking the stigma surrounding people with learning disabilities.

The Music Man Project provides a full-time music education to people with learning disabilities, giving them life-changing performance opportunities at venues such as the Royal Albert Hall in London. Mr Stanley believes that if more people can see the incredible musical skill of people with learning disabilities demonstrated at Music Man concerts, they will be viewed by society as confident, employable performers in their own right.

Anna proposed potential performance opportunities for the Music Man Project, including in Westminster Hall and at Party conferences. She also invited the Minister to Southend to see for herself the transformative effect that Music Man has on the lives of not just the performers, but the audience as well.

Speaking after the meeting, David Stanley said: “'It was a privilege to talk to the Minister about The Music Man Project and my recent work as the Government's Disability and Access Ambassador for Arts and Culture. We have hugely ambitious plans to transform accessible music education and performance for people with learning disabilities across the UK and around the world - all from our famous headquarters in the new City of Southend. The Music Man Project is a beacon of accessible arts and culture and a tremendous UK export, reversing perceptions and instilling creativity and confidence in a once-forgotten community. The service embraces accessible musical opportunities like never before, with learning-disabled role models at the centre. I am hugely grateful for the support of Anna Firth and Penny Mordaunt for providing such amazing opportunities for our inspirational musicians. Anything is possible!”

Following the event, Anna said: “I am extremely grateful to Chloe Smith for meeting with me and David Stanley to discuss opportunities to raise the profile of the incredible Music Man Project of which Sir David was a proud patron. David Stanley is a genuine community hero and his project has the potential to transform perceptions of people with learning disabilities in this country. Watch this space: we have big things planned for Music Man!”