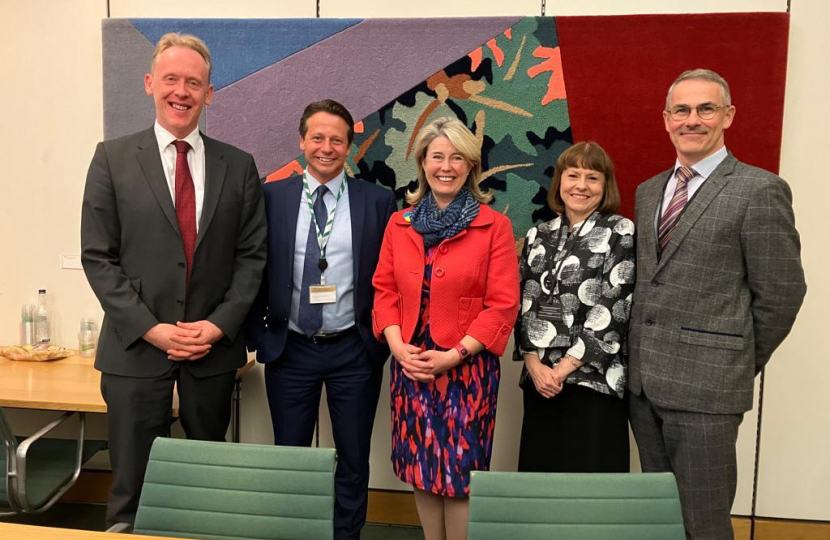 On April 25th Anna Firth, Member of Parliament for Southend West, held a meeting with Nigel Huddleston, Parliamentary Under-Secretary of State for Digital, Culture, Media and Sport to kick off Southend-on-Sea’s bid to be UK City of Culture 2029.

The meeting comes after Anna championed Southend’s bid on the floor of the House of Commons and asked for greater support and guidance for applicants as they bid for City of Culture. Also in attendance was David Stanley, founder of the Music Man Project, and Scott Dolling, Director of Culture and Tourism on Southend Borough Council.

Anna made bidding for City of Culture one of her key election promises and has wasted no time in securing a meeting and kickstarting the process. She explained that although City status was new to Southend, its thriving culture was not, and it deserves to be recognised as the UK’s greatest seaside city.

Anna, David and Scott argued that achieving City of Culture is the next step after the achievement of City status and offers millions of pounds in additional investment to help boost regeneration, a year in the cultural spotlight with hundreds of events encouraging long-lasting participation in the arts, and huge growth for local tourism. The Minister offered advice on how to make Southend’s bid as strong as possible and showed great enthusiasm for all that Southend has to offer.

When Coventry was the UK City of Culture last year, they benefitted from an additional £172 million of additional revenue, and 102 jobs were directly created, including 14 apprenticeships. In 2017, Hull received £89 million of direct investment, and an additional £676 million of cash to their economy. 800 jobs were created in a variety of sectors, and employment in the cultural sector increased by 15%.

Following the meeting Anna said: “I was incredibly pleased to be joined by David Stanley and Scott Dolling and sit down with the Minister to get the ball rolling on what will be an incredible process as we bid for City of Culture 2029. City status may be new but our incredible culture and heritage is not and I can’t wait to show the whole UK what an extraordinary place Southend is. We just have so much to offer! From the historic cockle industry to the longest pleasure pier in the world – the Minister was very enthusiastic about our bid and the fact that we’ve secured a meeting so early is extremely promising.

“This is the natural next step for our community and the investment we attract from this will make Southend safer, healthier and wealthier as a community. I could not be more thrilled to kickstart this process and I can’t wait to see the momentum and excitement grow over the next few years as we shape the next chapter in the history of Southend!”

David Stanley said: “It was exciting to talk to the Minister about our intentions for Southend to become City of Culture in 2029. He was impressed that we were making early preparations to maximise our chances of success and was highly encouraging of our ambition to build on the momentum of City Status in the coming years. You could feel the buzz in the room as we proudly extolled the virtues of our City and explored unique plans to transform Southend into a fully accessible cultural centre of excellence for our residents and for the nation!”